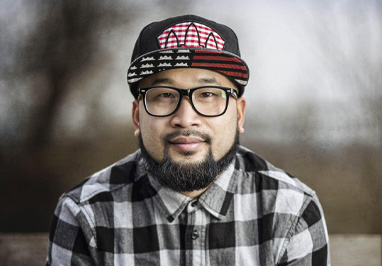 on Cambodia and How Distance Brings Clarity & Courage

Silong Chuun talks to us about how distance brings clarity and awareness, reclaiming narratives through his clothing brand “Red Scarf Revolution”, creative ways to spark conversations and recontextualize history, parallels between the communist regime in Cambodia then and the capitalist administration in the US today, memoranda of understanding for Cambodian, Lao, and Vietnamese refugees, colonialism, imperialism, displacement, community, and how Southeast Asian immigrants struggle, hustle, shine, and thrive.

Silong Chhun was born in Cambodia at the end of the Khmer Rouge regime in 1979. He and his family arrived in the U.S. as refugees under the 1980 Refugee Resettlement Act. He discovered his love for music as a kid and set a path to pursue a career in the music industry which led him to where he is today as an “artist”. Disciplined in multimedia, he has worked on various projects ranging from graphic design, photography, music production, and videography.

In 2013, Silong launched the Red Scarf Revolution. With its mission to be more than just another clothing label, Red Scarf Revolution gives voice to the once silenced art, culture, and language. Its most important purpose is memorializing the darkest tragedy in the history of Cambodia with designs that represent the resiliency of the Cambodian people.

In 2017, he curated and debut his first-ever exhibit called “Scars and Stripes” which centered on refugee trauma, diaspora, U.S. resettlement, and deportations during the post-Khmer Rouge era. The exhibition achieved critical acclaim from the City of Tacoma. With the momentum of “Scars and Stripes,” Tacoma officially proclaimed April 17th, 2017 as Cambodian Genocide Memorial Day. As one of the organizers, Silong able to collaborate with national organizations such as the National Cambodian Heritage Museum (NCHM) for the 1st National Day of Remembrance on April 17th, 2017, which marked the anniversary of the Khmer Rouge takeover of Cambodia.

Today, he regularly advocates with the Cambodian community members who are targeted by I.C.E. with orders of removal. The Khmer Anti-Deportation Advocacy Group of Washington (KhAAG (cage) for short) assists, supports and guides affected community members with their family on strategies on how to navigate the complicated state and federal immigration system: Cambodian Refugees Face Increase Deportations.

Silong is currently the Digital Communications Manager at Pacific Lutheran University, former Communications Associate at Tacoma Community House,  and serves as the Board Secretary on the Metro Marks Arts & Heritage Advisory Council.