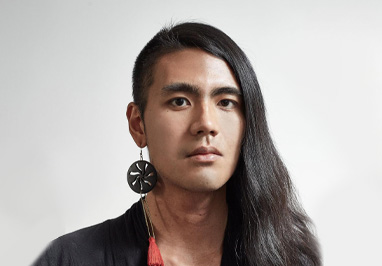 on the Diaspora ↔ War ↔ Tourism Complex

*Note: At 24:00, what Sarnt meant here is a contemporary ethnic segregation amongst Southeast Asians in middle-class milieus, which happens less in the Berlin environment, in comparison to Bangkok. Historically, however, in West/East Germany there had been huge racial segregation imposed by both states, for example, between migrant “contract” workers who weren’t allowed to live or interact with regular citizens through out the 1970/80s — another complex topic of another in-depth conversation.

Sarnt Utamachote talks to us about postcoloniality, migrant movements and migrant spaces, internationalism, forms of survival for artists and queer and queer artists, the Diaspora ↔ War ↔ Tourism Complex, and how access to language affects access to archival research. Plus some K-pop, Sundance, Bangkok art scene, and the Berlin club scene.

Sarnt Utamachote is a queer filmmaker, photographer and curator. He is interested in deconstructing the “surfaces”, what rendered the “humans” behind invisible, by highlighting/curating the fragments; the humane subtleties often overlooked in everyday life – possible sources of social dignity and subject positions.

He studied Industrial Design at Chulalongkorn University, and Cinema Studies and Literature Studies at the Freie Universität of Berlin. He co-founded collective un.thai.tled (of Thai-German diasporic critical creatives), through which he curates critical cultural exhibitions. His last project was the exhibition “Beyond the Kitchen: Stories of Thai Park”, where he curated and researched the archive of Thai migration in Berlin with Bezirksmuseum Charlottenburg-Wilmersdorf. The collective also holds film screenings, including the annual un.thai.tled Film Festival Berlin.

He researches and collects the archive of Thai migrations and movements in Berlin/Germany, in an attempt to redefine how migrant spaces and micro-histories are relevant to the postcolonial urban discourses. He was one of the selected participants of the Young Curators Workshop for 11th Berlin Biennale for Contemporary Art 2020, organized by Pip Day.

As a film producer/director/ editor, Sarnt utilizes cinema as a means for social engagement and an exercise of creative freedom beyond social conditional realities. His video installation “I Am Not Your Mother” was commissioned and exhibited at International Rotterdam Film Festival 2020 and nominated for “R.D. Pestonji Award” for best Thai short film at Thai Short Film and Video Festival Bangkok 2020. He is the 2020 recipient of Xposed Short Film Fund, granted by Xposed Queer Film Festival Berlin. His music video for Coco Elane’s ‘Deep Talk’ was nominated for a Bucharest Film Award.