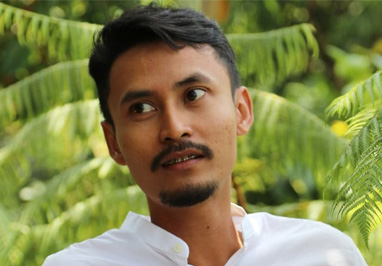 on Food as Proof of Hybridity, Resistance, and Resilience

Nurdiyansah tells us about his trips across Indonesia to explore how spices from the region hold a multitude of stories that transcend the epochal eras: Dutch colonization, Japanese occupation, the national revolution era, New Order era, Reformasi, and the new digital age. The aroma and flavor of traditional dishes and culinary delights offered him personal and political reflections on the hybridity of identity and the convoluted meaning of “home.” What does it really mean to be “Indonesian”? What are all the influences that shaped “Indonesian” cuisine? Is there really a pure “Indonesian” dish? How was pempek related to a nationwide massacre? Plus, a peek into “problems” in Alexandra’s life, digital nomads, traditional textiles, and queer culture in Indonesia.

Nurdiyansah Dalidjo is an interdisciplinary writer, researcher, and activist who seeks to memorialize the role of spices as the ingredients that fueled the revolution in Indonesia. He started his career as a journalist at Yayasan Jurnal Perempuan and has a master’s degree in tourism through Program Beasiswa Unggulan, a scholarship program from the Indonesian Ministry of Education and Culture. Since graduating, he has gained over 10 years of experience in Development issues with a focus on ethical and sustainable tourism, indigenous issues, and social justice.

Nurdiyansah is the founder of the tourism portal JejakWisata.com and co-initiator of the Kain Kita project, a collective independent movement that shares cultural information and stories of traditional fabrics and indigenous textiles known as kain in Indonesia. Previously, he was the research and publications manager at Perkumpulan SKALA, a non-profit organisation with a journalist membership base and a focus on environmental sustainability. He led SKALA’s research teams in investigating reports on Indonesia’s forest fires and haze disasters in 2015; on local wisdom held by indigenous peoples and related to disaster risk reduction in Indonesia; and about wildlife trafficking in Indonesia.

His writings have been published on The Jakarta Post, Overland, mata jendala, Magdalene.co, Jurnal Perempuan, Tourism Watch Indonesia, Jurnal Wastra, Maximillian, Women’s Media Center (WMC) FBOMB , and many others. In 2015, Nurdiyansah released his first travel writing book, Porn(O) Tour (Metagraf, 2015) in which he campaigns for the ethical and responsible tourism issues in a popular way. He is currently based in Jakarta and spends his time exploring colonial histories through food and textile in Indonesia.