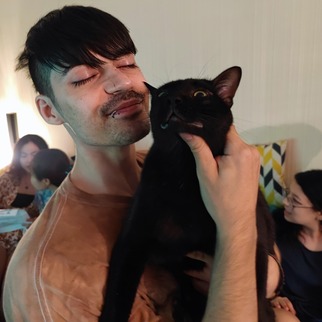 on Finding Home in Vietnam

Ruth and Alexandra often find themselves furious about foreigners coming to the “exotic” islands of Indonesia and using the archipelago as a pretty background for their Instagram photos or YouTube vlogs.  With Fred Clapp, they share stories of treading responsibly on foreign lands, deromanticizing distant locales, and finding a home halfway across the world. Plus, feline hierarchies, protesting babi guling, practical forms of censorship in Vietnam, exporting culture, and the constant cycle of imperialism. Maybe make yourself some Mexican food to accompany this episode!

Frederic Clapp is a Vietnam-based game designer and cat enthusiast originally from Mexico City. He is passionate about interactive narratives and how game systems provide a good model for understanding the systems governing our world. His passion for designing games and interactive narratives took him to Ho Chi Minh City, where he has been living for the last 5 years. There, he spends his time trying new food and writing about cats he meets in his travels around Vietnam and Southeast Asia.