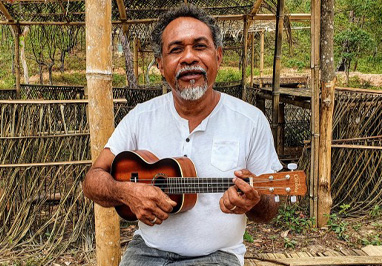 on Timor Lorosa'e and Legacies of Occupation Seen Through Food Systems

Eugenio “Ego” Lemos talks to us about permaculture practices, legacies of occupation, reconciliation and resilience, the dilemma of post-conflict countries, common problems with aid and charity, Indonesian influence versus Australian presence in Timor, East Timor then versus West Papua now, ricenization as a form of cultural destruction, and how socio-political events at large affect personal lives on the micro scale through food during the Portuguese colonization, Indonesian occupation and in present day.

Ego Lemos is the founder of the Sustainable Agriculture Network and Organic Agriculture Movement in Timor-Leste. He is also the Founder of Permaculture Timor-Leste (Permatil), as well as the founder-counselor of the PermaScout and Perma-Youth movements.

He currently serves as the Executive Director of Permatil. Previously, he was the National Adviser for the Ministry of Education of Timor-Leste.  He is also a lecturer in Sustainable Agriculture and Public Arts & Culture at the University of Timor-Leste.  In 2019, Ego was selected by Earth Company as 1 of 5 Impact Hero finalists.

As a singer-songwriter, Ego sings and writes original music in his native tongue, Tetun. His song “Balibo” (featured in the 2009 film Balibo) was awarded Best Original Song at the 2009 Screen Music Awards and the 2009 APRA Award for best song in a film.

Ego also co-authored ‘Permaculture Gardens for Kids’, as well as both editions of the Tropical Permaculture Guidebook.  He is the sole author of the ‘Training Manual for Agro-biodiversity in Timor-Leste (GIZ-AMBERO) and the Arts and Culture section of the National Curriculum for Basic Education Grad 1 – 6 (Ministry of Education).